Home » About Us » History

The Wadsworth Center evolved from the state's Antitoxin Laboratory, established in 1901 to standardize and manufacture antitoxin, the prevailing treatment for communicable diseases such as diphtheria and anthrax. In 1914, the organization was designated the Division of Laboratories and Research, and Augustus B. Wadsworth was named director. 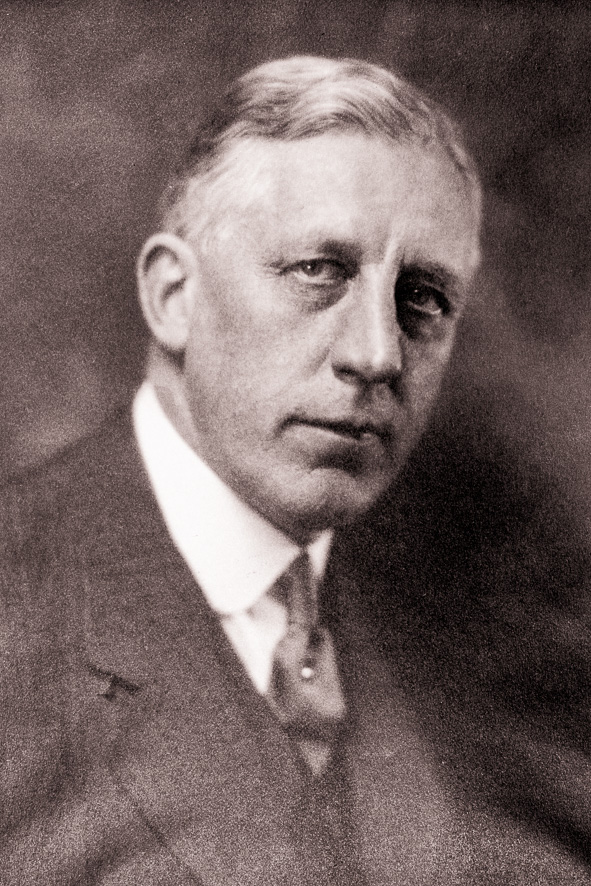 Dr. Wadsworth, who remained director until 1945, set a precedent for excellence in all matters scientific. He also urged his staff to pursue original investigations, thus captivating their curiosity and capitalizing on their intellectual assets. Dr. Wadsworth understood that research, public health testing and science education were complementary, creating a synergy that continues to inform the vibrant scientific community that now bears his name.

Smallpox. Cholera. Typhoid. Tuberculosis. At the turn of the 20th century, death frequently arrived in these guises. For infants and children, though, no infection was feared more than diphtheria, whose microbial toxin coursed through young bodies, ultimately strangling its victims. In New York City alone in the 1890s, there were some 1,000 deaths a year from the disease.

As the germ theory of disease emerged from Europe and took hold in the U.S., the first science-based remedies for infectious diseases were made possible. Among the earliest successes was antitoxin for the treatment of diphtheria. In 1901, the very year that the first Nobel Prize for Medicine or Physiology was awarded to the German microbiologist Emil Behring for his discoveries that led to the development of diphtheria antitoxin, New York State established a laboratory to produce and distribute the remedy. The Antitoxin Laboratory is the forerunner of today's Wadsworth Center laboratories.

"The laboratory performs a three-fold purpose in saving lives, preventing disease, and in the education of the profession and public toward a prompt and more efficient prevention and a better treatment of these diseases [diphtheria and tetanus]." 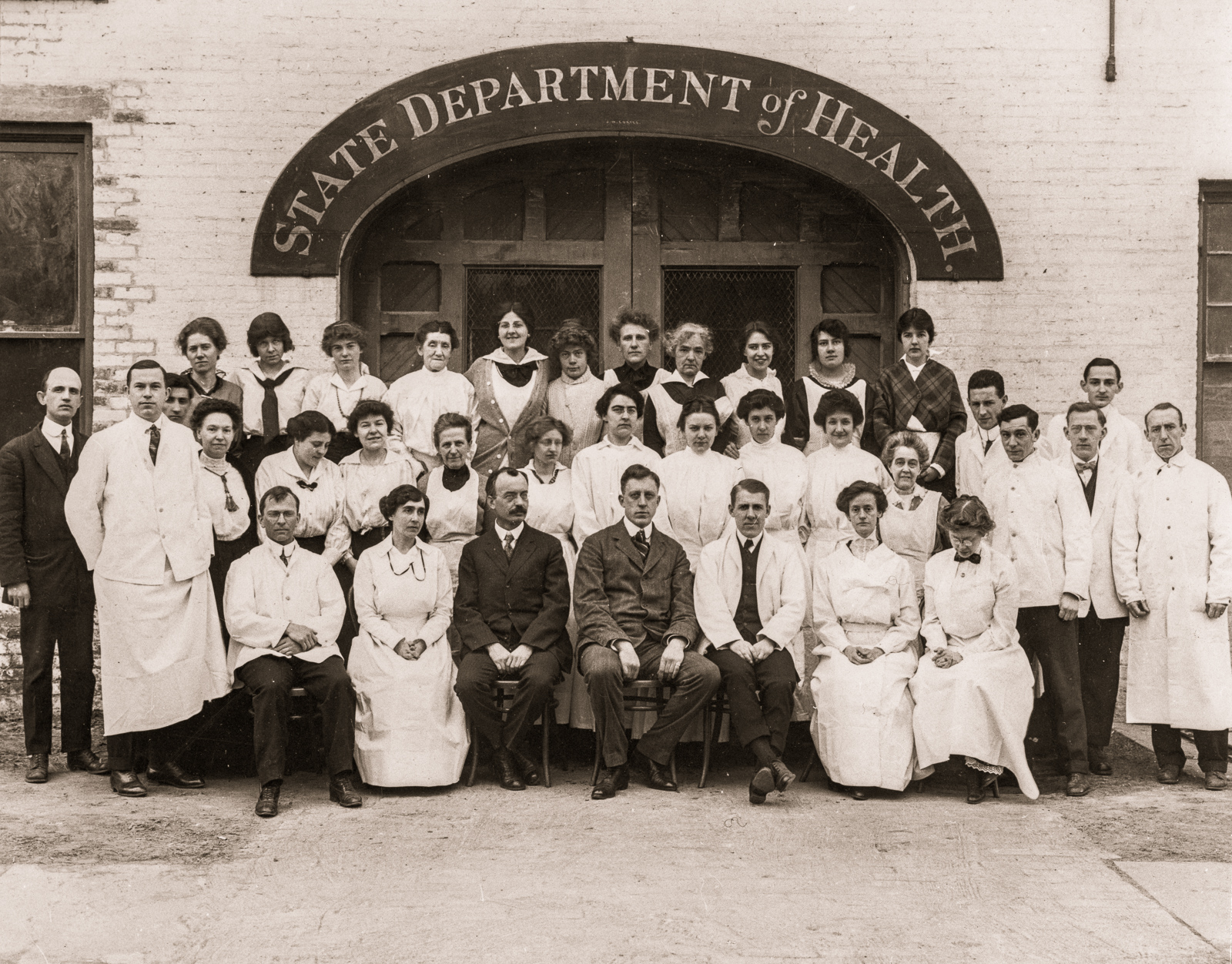 The Antitoxin Laboratory was housed in a modest, two-story brick building in a residential neighborhood on Yates Street in Albany, New York. Horses used in the production of antitoxin were stabled there, necessitating that any sterile work be conducted in space sublet from the nearby Bender Hygienic Laboratory.

Several additions were made to the original structure over time, allowing the antitoxin production and other diagnostic services that had been subcontracted to Bender to merge in 1906 at Yates Street under the banner of the State Hygienic Laboratory. As early as 1909, neighbors of the facility complained about the animals, and the building ultimately was declared a nuisance by the city of Albany in 1913, the same year in which the state purchased a farm in Guilderland, now the site of Wadsworth Center's Griffin Laboratory. 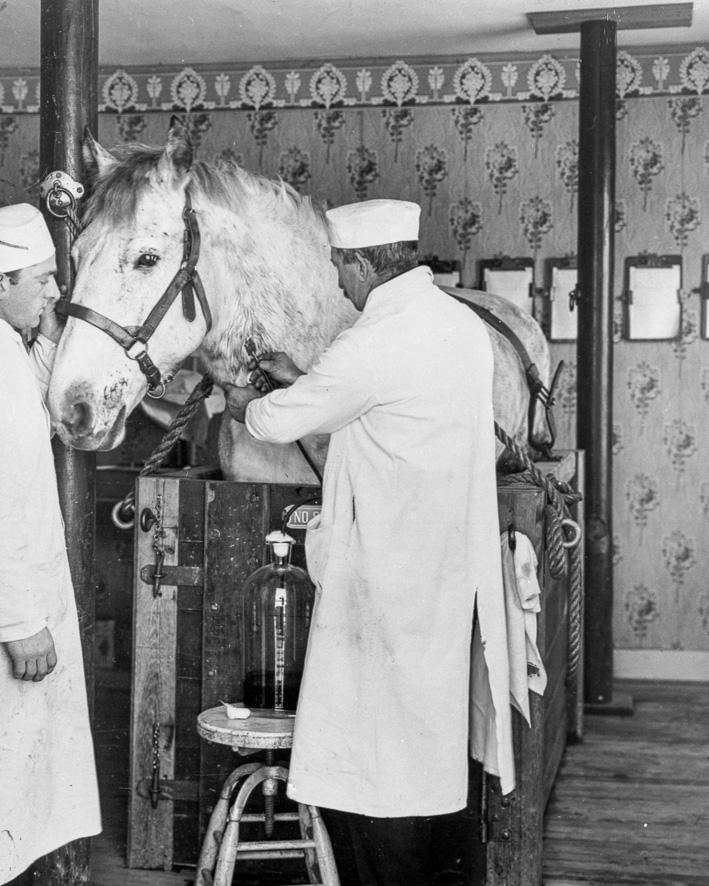 To manufacture diphtheria antitoxin, horses were inoculated with the toxin produced by the bacillus Corynebacterium diphtheriae, the causative agent of diphtheria.

In response to this antigen, the animal's immune system generated specific antibodies, or antitoxin, to fight the infection. By bleeding the horse and processing the blood, the antibody-containing serum was available for the prevention and treatment of the disease in humans.

The laboratory's first director, Herbert D. Pease, M.D., started the process by personally immunizing 15 horses with diphtheria toxin in October, 1901. In February, 1902, the first shipment of diphtheria antitoxin was sent to the Willard State Psychiatric Hospital, where the disease had been present for years. Four months later, the first tetanus antitoxin was made available to physicians. 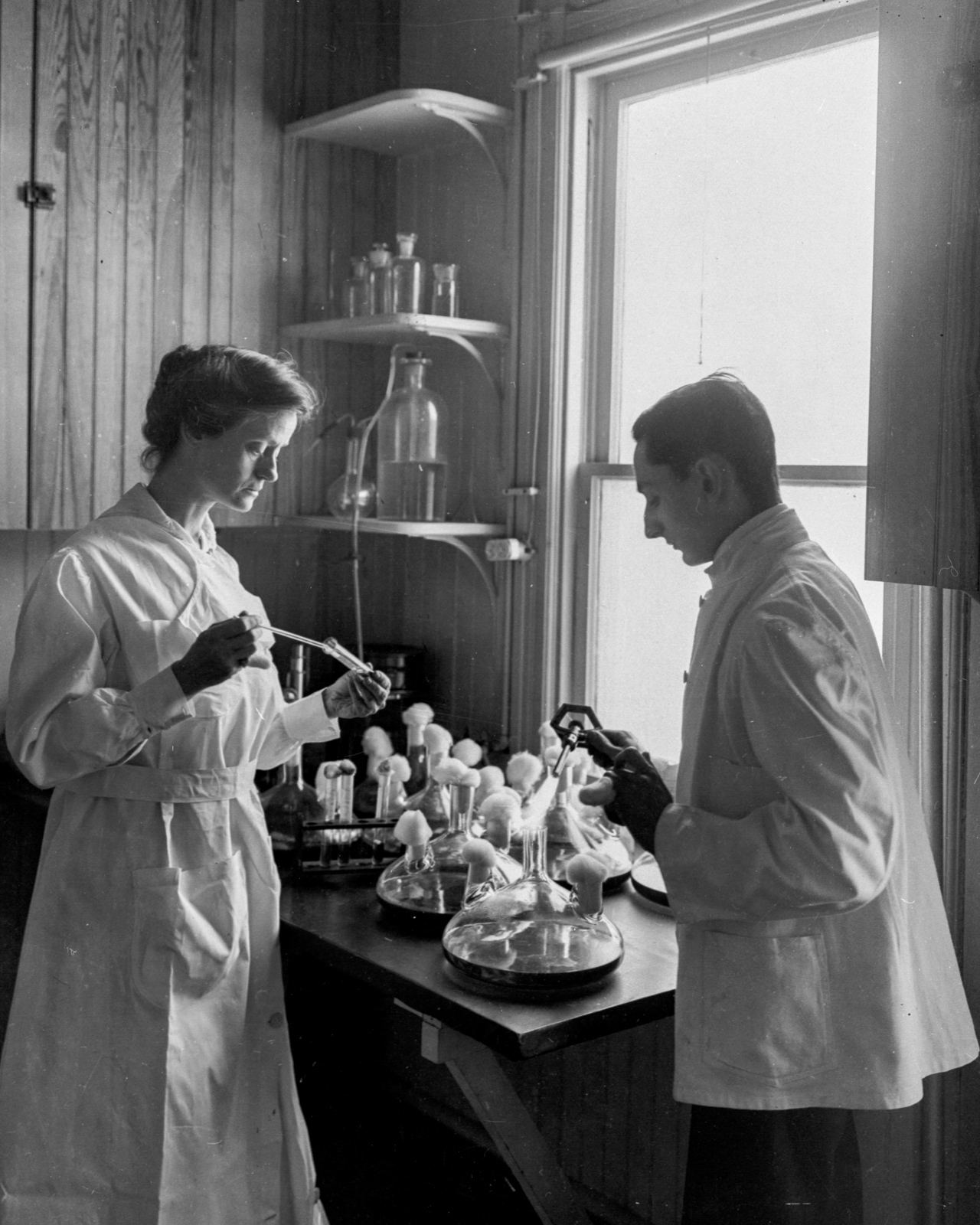 The careful manufacture of diphtheria antitoxin and other preparations involved, among other processes, examining the products for sterility (top) and potency (bottom). An incident in 1901 in St. Louis, Missouri, proved how dire were the consequences of ignoring such procedures.

Diphtheria antitoxin contaminated with tetanus bacilli killed nearly a dozen children in that city, leading to the passage in 1902 of the federal Biologics Control Act, which required that manufacturers be licensed and their processes be approved by the Public Health Service.

From the Antitoxin Laboratory's earliest days, its preparations were praised for their high quality and its methods followed by other laboratories in the U.S. and elsewhere. 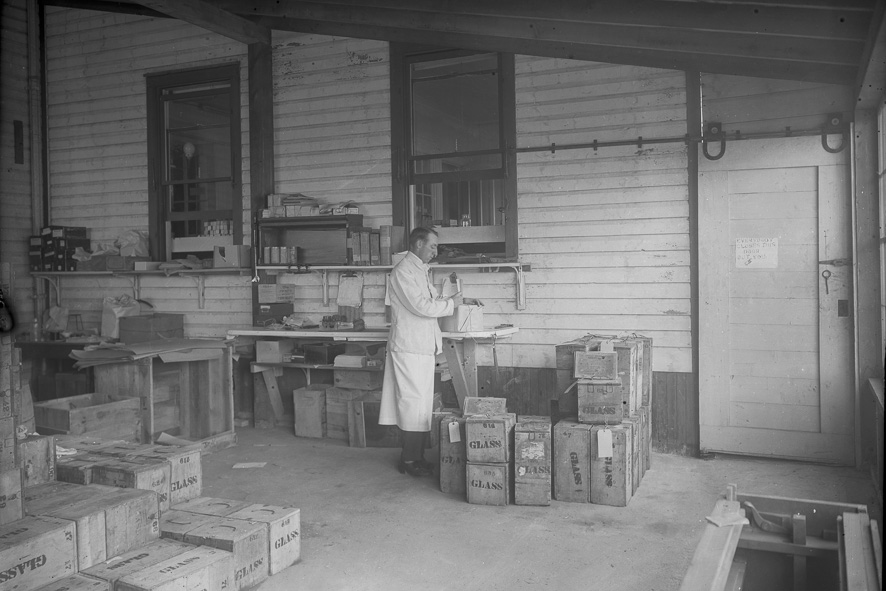 In 1903, the total output of diphtheria antitoxin was more than double the amount in the first nine months of the laboratory's existence. This included a shipment in early November of sufficient quantity to inoculate the entire population of the Elmira State Reformatory where the disease had been diagnosed; close to 2,000 bottles of 1,500 units each were forwarded within three days.

State and charitable institutions, as well private patients who could not afford the treatment, were given antitoxin free of charge. Demand for the product continued to increase, with the average monthly distribution of antitoxin in 1909 more than the total amount issued in 1902.

As production increased, so did complaints from Yates Street neighbors to William S. Magill, M.D., who became the laboratory's second director in 1909. From his initial through his final annual reports, Dr. Magill petitioned for improved quarters, including a farm for the animals. 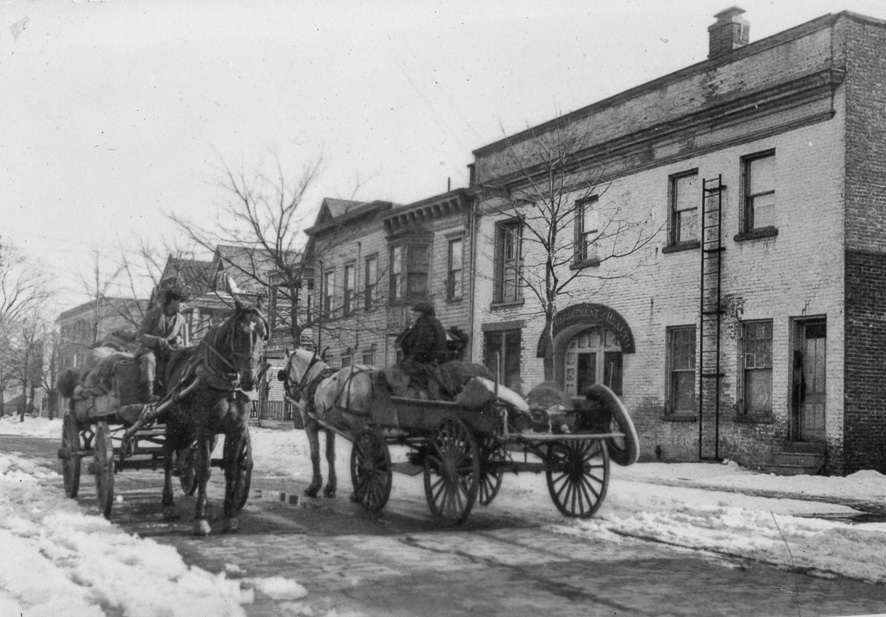 An enlarged Yates Street facility opened for business on November 1, 1906, and provided for the first time a single site for all laboratory activities. These included antitoxin manufacture, diagnostic examinations for the detection of infectious diseases and control of quarantines, and special investigations of epidemics or unsanitary conditions. A chemist and a bacteriologist were hired and new services introduced, including the sanitary chemical examination of water.

Remarking on this effort in the Department's annual report the following year, Commissioner Eugene H. Porter, M.D., wrote:
"Some of the conditions which the Department has discovered through the work of the State Laboratory would seem to indicate that something wet was the only standard for quality of certain water supplies."

In addition to testing drinking water, the laboratory also undertook "a more thorough and exhaustive investigation of beers brewed and sold in this State."

Recruiting excellent personnel to staff the expanded laboratory was uppermost in Commissioner Porter's mind when, in writing the Civil Service Commission in 1906, he urged that "the power of initiation" was the most important qualification for scientific assistants.

An assistant bacteriologist would soon prove his point by undertaking the redesign of syringes distributed with diphtheria antitoxin; the existing ones had proved troublesome, as over time the rubber stopper stuck to the glass tube and could not easily be dislodged.

In the same period, laboratory staff were called upon to share their expertise in the Department's Sanitary Institute, the first school for health officers in the U.S. By 1909, there were 15 week-long courses, which included lectures, demonstrations and laboratory exercises.

Bacteriological examinations at the State Hygienic Laboratory more than tripled between 1908 and 1911, largely for the diagnosis of diphtheria, tuberculosis and typhoid. This routine activity paled in comparison to an extraordinary charge the laboratory undertook from July to November, 1911 -- diagnosis and control of cholera at New York City's Quarantine Station.

Outbreaks of the disease in ports of origin of ships docking in the city necessitated an all-hands-on-deck response from the city and state Health Departments. Laboratory director William S. Magill, M.D., transferred all available equipment, supplies and personnel from Albany to the Quarantine Station. Some 27,000 passengers were examined during the period. On a single day in November, with a staff of four, 2,076 passengers were listed, examined, cultures made and diagnoses completed so that all were released from quarantine within 31 hours. 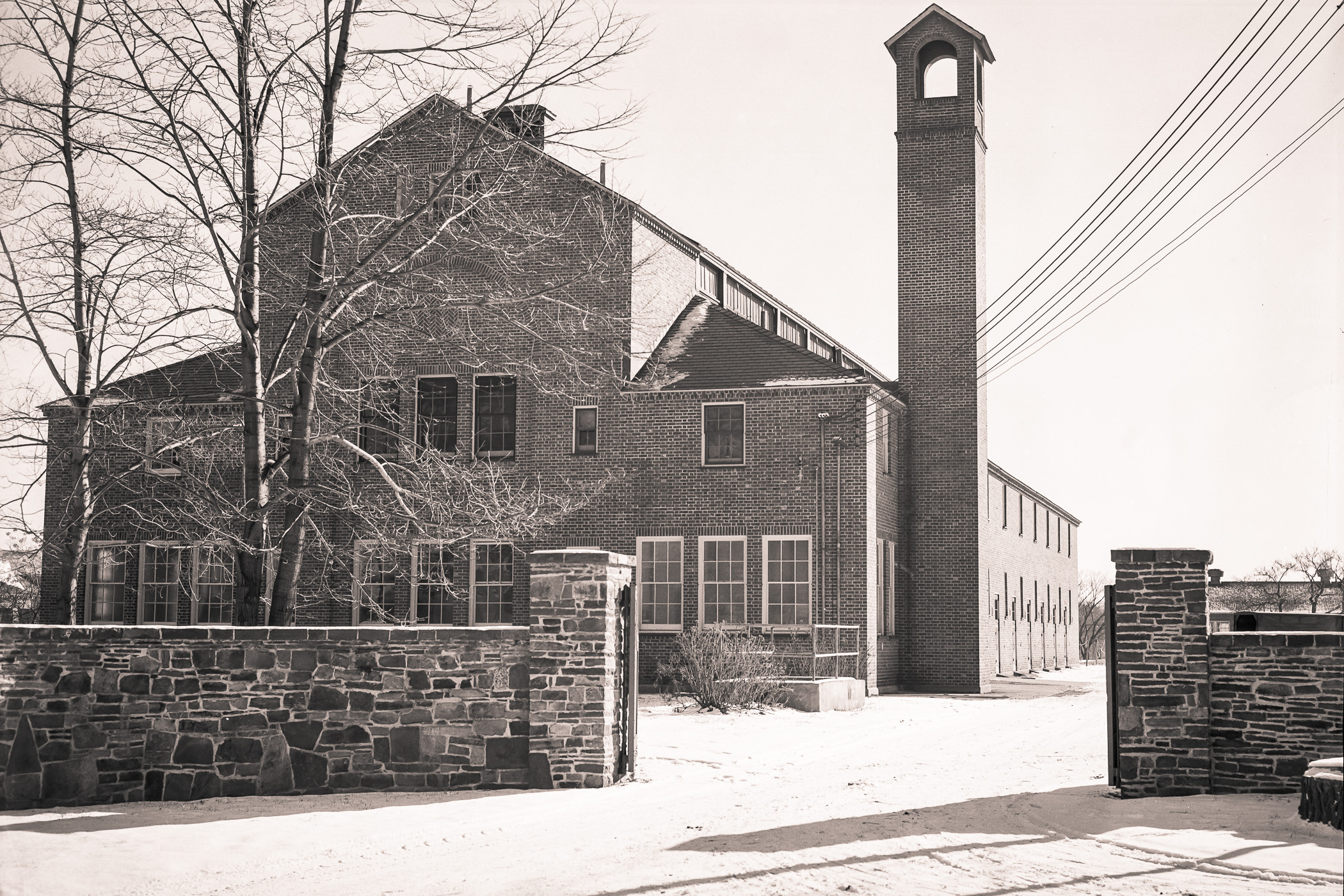 After years of petitioning the commissioner, who in turn appealed to the governor, Dr. Magill's wish for a farm was granted in May, 1913, with a $10,000 appropriation from the legislature.

Shortly thereafter, property was purchased in Guilderland on present-day Route 155, colloquially known as State Farm Road. The same year, Governor William Sulzer appointed a commission to evaluate the public health and the public health laboratory of New York State, and named as its chair Hermann M. Biggs, M.D., chief medical officer of the New York City Department of Health. The commission called for a reorganization of the state Health Department, which "should be provided with new laboratories, with sufficient land and equipped with adequate facilities for making examinations and analyses for local health officers and for original research." Dr. Biggs was drafted as state health commissioner in 1914. He in turn appointed Augustus B. Wadsworth, M.D., director of the Division of Laboratories and Research. 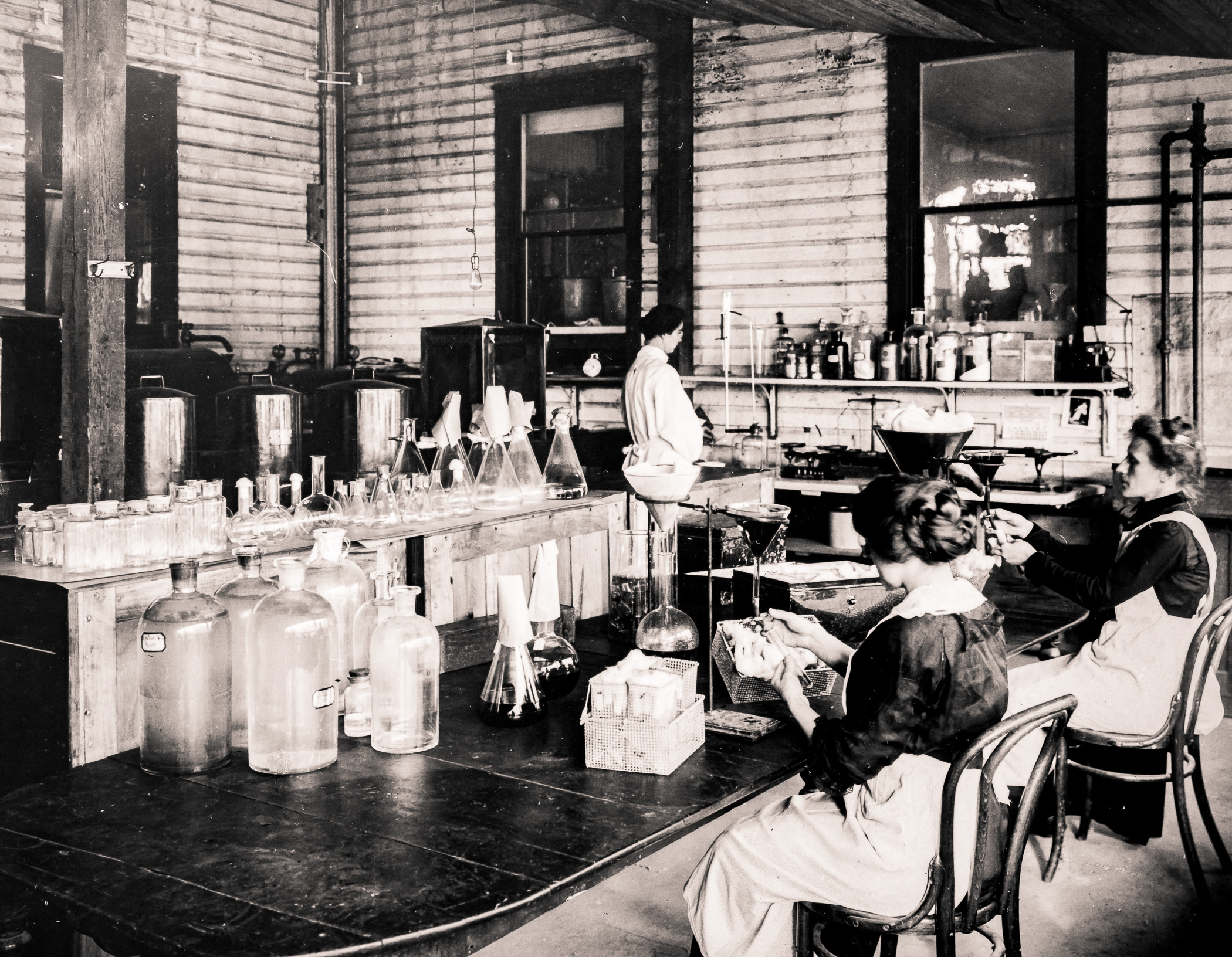 With the transfer of horses to the farm, the Yates Street facility underwent substantial renovation. In Dr. Wadsworth's first annual report, he wrote that "the work was carried on under the greatest difficulties. Conditions were not even sanitary. The laboratory rooms in the building on Yates Street were small and crowded. Only a part of the building was arranged for work, while the remainder was used for storage and not heated, and without plumbing for water or gas."

In short order, he turned a former storage room into a media production facility, moved the diagnostic laboratories to rooms more suited for that purpose, created a reference library in the former director's office, and installed new heating, lighting and plumbing systems. The overall effect was to double the space for laboratory work. 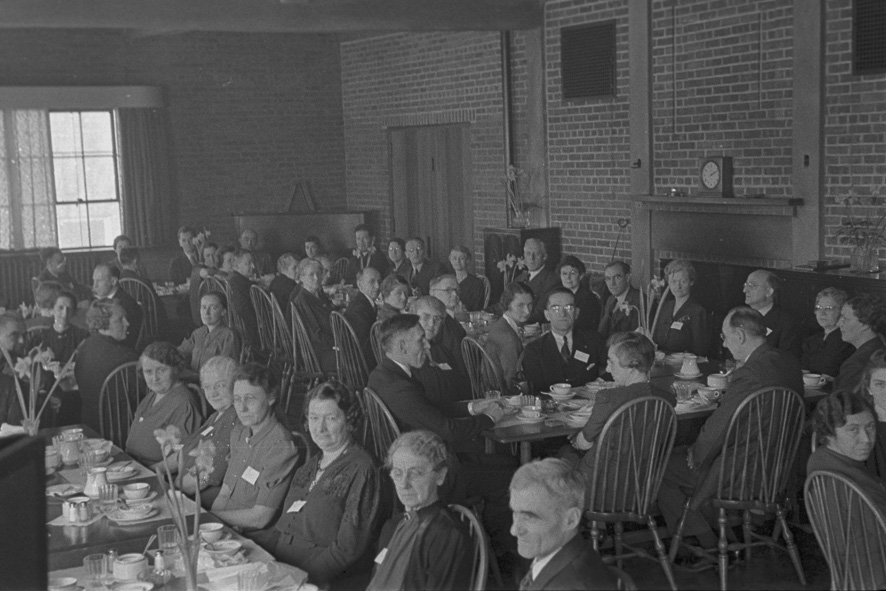 Just as he expanded and renovated the laboratory's physical space, so too did Dr. Wadsworth increase and revitalize the laboratory's staff. Seated front and center circa 1915, he began his first year as director with a staff of 17 and ended it with 46. The trend continued. He effected the construction of a new main laboratory building on New Scotland Avenue in Albany. Designed for from 60 to 70 workers, by the time the space was occupied in 1919, his staff had grown to 150. On that site today stands the David Axelrod Institute for Public Health, one of several laboratory facilities that constitute the organization that now bears the name Wadsworth Center.