White-nose syndrome, first identified in the US in New York during the winter of 2006-2007 has killed millions of North American bats, and as of May 2016, has been confirmed in 29 states and 5 Canadian territories.

Threatened and endangered bat species alike are affected. In some locations, the little brown bat population is 10% of what it was before white-nose syndrome.

Dan Ashe, Director of the U.S. Fish and Wildlife Service states, “Bats are a critical part of our ecology and provide essential pest control for our farmers, foresters and city residents, limiting the need to spray harmful pesticides. As the disease continues its spread into new areas, it is more critical than ever that we continue our strong support for solid science to inform wise decisions about our natural resources. Previous research funded by the U.S. Fish and Wildlife Service has led to major breakthroughs in our understanding of white-nose syndrome, providing a measure of hope that we can defeat this devastating disease.”

To this end, the Service has set aside $32 million, a portion of which Dr. Chaturvedi has received to study the control of Pseudogymnoascus destructans, the causative agent of white-nose syndrome, with another fungus, Trichoderma polysporum.

Dr. Chaturvedi has found a strain of T. polysporum that inhibits the growth of P. destructans with some degree of specificity, as a closely related fungal species is not affected. T. polysporum is capable of growing in the same cool environment as P. desctructans making it a potential weapon in the fight against white-nose syndrome. 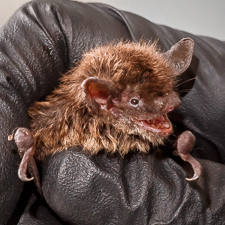