SARS-CoV-2, like all viruses, is constantly creating new variants through mutation of its RNA genome. Most mutations are of little or no consequence. However, every once in a while, a new mutation can increase transmissibility, increase disease severity, cause the virus to escape the body’s immune response, or do any combination of these.

Because each combination of mutations represents that virus’s unique identity, scientists around the world compare the genetic differences between viruses through a process called sequencing. Identifying new variants helps scientists to understand their relatedness and how they spread through communities, both over time and geographically. This is especially important to understand when new variants emerge that affect the virus’s behavior.

Since spring 2020, shortly after the first reported case of SARS-CoV-2 in New York and the first outbreak in Westchester County, the Wadsworth Center has been sequencing viruses from across the state to better understand viral transmission. This effort took on heightened urgency last December when news arrived from England of a new, more transmissible and potentially more deadly variant. Since then, additional variants of similar concern have emerged, underscoring the importance of Wadsworth Center’s sequencing efforts to allow an understanding of where these variants circulate, and to potentially target appropriate public health mitigation efforts.

Wadsworth Center has sequenced and analyzed more than 8,000 viral sequences, with over 80% of those completed since late December when the new variants arrived from overseas. For most of last year, Wadsworth Center produced the vast majority of sequences from NYS, and as of this month, almost 40% of all NY-derived sequences in the international database, GISAID, were deposited by the Wadsworth Center. Through a coordinated effort with the Wadsworth Center, other institutions are now ramping up their sequencing efforts to enhance statewide efforts to monitor the emergence and spread of SARS-CoV-2 variants.

Increase in the NYC metropolitan area of the frequency of the B.1.526 E484K variant (with a potential for reduced effect of anti-COVID-19 antibodies).

Recent publications on this topic: 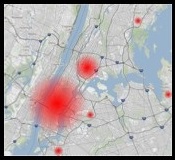