Considering that the number of mumps cases per year has decreased by more than 99% since the introduction of vaccines against the disease, it is relatively rare these days to hear about a mumps outbreak. But that is just what has happened this summer as more than 45 in the Nassau County city of Long Beach became ill. What makes this outbreak so surprising is that this population has a high vaccination rate.

All sample testing and genotyping (sequencing) throughout the course of this outbreak were performed at the Wadsworth Center. The Virology Laboratory is a Vaccine Preventable Disease (VPD) Laboratory Reference Center which works closely with the Association of Public Health Laboratories (APHL) and the Centers for Disease Control and Prevention (CDC) to provide quality testing to ten states.

The VPD Laboratory Reference Center at Wadsworth is one of only four public health laboratories in the United States funded by the CDC to perform diagnostic testing and genotyping and provide surge testing during outbreaks of viral diseases which are preventable by vaccines.

In addition to mumps, the laboratory tests for measles, rubella and varicella zoster. They use standardized methods developed by the CDC, including tests for detection and genotyping, with maximum turn-around-times of 2 and 10 days respectively.

Dr. Kirsten St. George, Director of the Virology Laboratory, notes that specimens from the outbreak belong to genogroup G, which is common. However, some differences in the RNA sequence of the virus have been detected compared with other genogroup G mumps viruses from outbreaks in recent years.

Interestingly, symptomatic cases in the recent NYC outbreak occurred even in patients who had received the recommended two doses of MMR vaccine. Work is currently ongoing to correlate the sequence differences with the ability of this potentially new strain of the virus to evade vaccine protection. 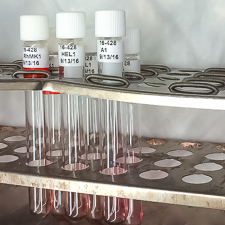