Wadsworth Center Scientists, including graduates of the Masters of Science in Laboratory Sciences Program, laboratorians, research scientists, principal investigators, and the current and former Directors took part in the conference recently held at the Albany College of Pharmacy and Health Sciences.

Dr. Jill Taylor, Director of the Wadsworth Center, gave the plenary keynote address titled, Advancing Public Health Through Molecular Technologies, during which she reflected how Wadsworth Center was founded on the principle that research improves public health – a principle still embraced at the Center over 100 years later.

Dr. Taylor described the current drivers of changes in clinical laboratory practice: new hardware, including closed systems and point of care devices; Precision Medicine, with its holistic approach to patient data; the Wellness Movement, which emphasizes the participation of the patient in his/her own health; and finally, public health threats such as antimicrobial resistance and emerging diseases.

Dr. Nicholas Mantis, Research Scientist in the Division of Infectious Diseases at the Wadsworth Center and Associate Professor in the Department of Biomedical Sciences School of Public Health, University at Albany described Single Domain Camelid Antibodies for Biodefense Therapeutics and Diagnostics during the morning Emerging Microbial Threats Session. His group has produced over 100 antibodies against ricin toxin and performed structural analysis of nanobody-ricin complexes to identify which specific residues are involved in neutralization. They have also engineered bispecific antibodies that protect mice against the lethal effects of ricin toxin. 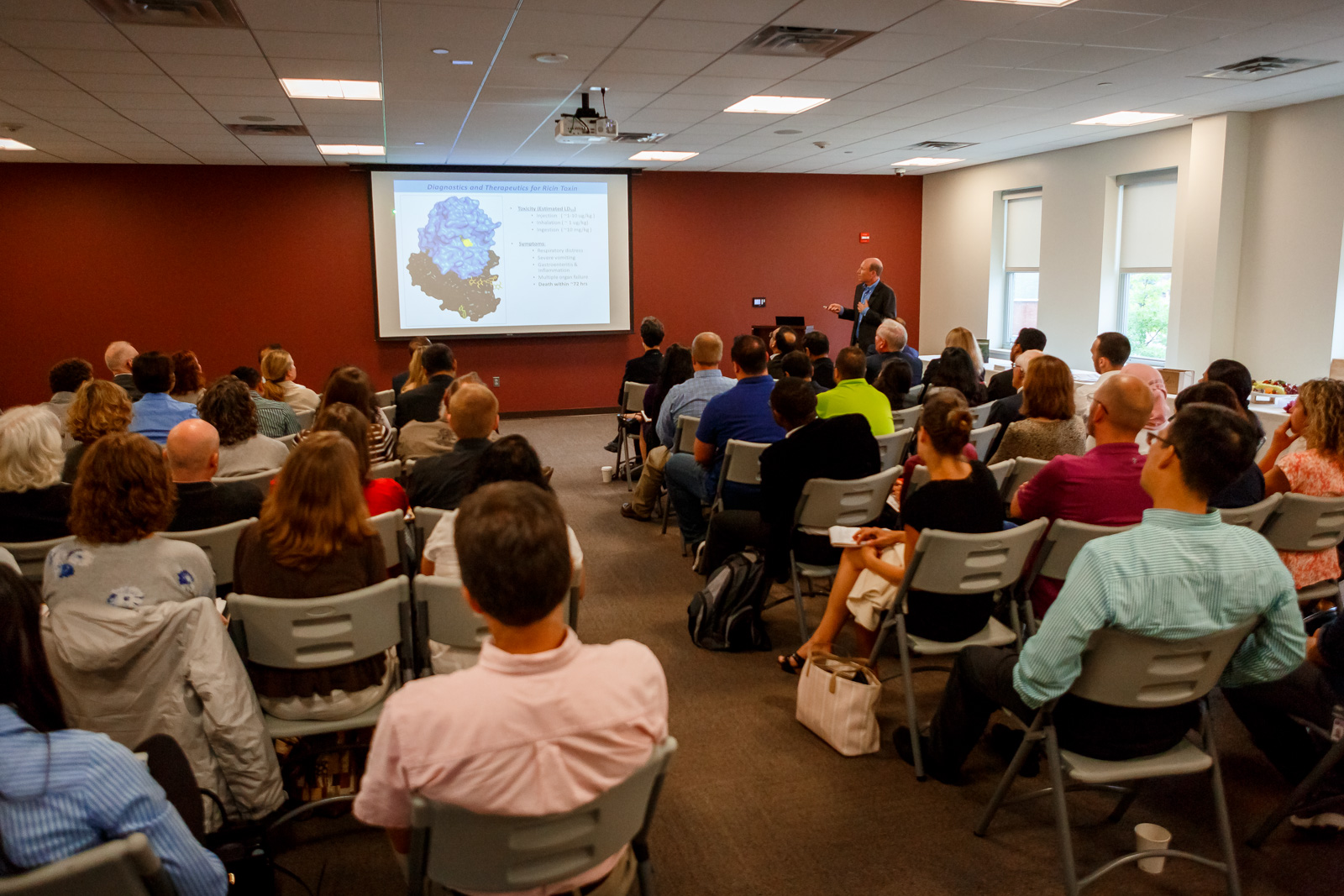 Dr. Hongmin Li, Wadsworth Center Researcher and Associate Professor of Biomedical Sciences, University at Albany talked about Repurposing Existing Drugs for Zika Virus with Nanomolar Efficacy. No drug exists to treat Zika at the moment. Repurposing an existing, approved drug, ideally one which is safe for use in pregnant women and women of childbearing age, would save a decade or so of development. In Dr. Li’s work, viral essential enzymes serve as ideal targets for anti-viral drug designs.

Dr. Laura Kramer, Director of Wadsworth Center’s Arbovirus Laboratory and Professor of Biomedical Sciences, University at Albany presented The Increasing Global Threat of Emerging Viruses. It was her experience studying factors that constrain or enhance viral evolution and adaptation that led her to predict the emergence of Zika as it increased in activity in Oceania. Now she is watching other viruses that are emerging and expanding in range, as did West Nile first, then Chikungunya, and Zika before they were introduced into the Western Hemisphere.

Between February and the beginning of October, the Wadsworth Center tested specimens from over 8,000 individuals and about ten percent were positive for Zika virus infection.

Researchers from the Bacteriology and Biodefense Laboratories, including recent graduates of Wadsworth Center’s Masters of Science in Laboratory Sciences Program, also participated in the poster session.

Complex problems such as emerging microbial threats can only be answered when addressed from many angles. To this end, the conference brought together microbiologists, immunologists, experts in inventions and patent law, chemical engineers and those with valuable experience in pharmaceutical and translational medicine, among others.