Back to Senior Staff

Mosquito-borne arboviruses (arthropod-borne viruses) include several clinically important viruses, such as dengue, Zika, yellow fever, West Nile, and chikungunya virus. Since there are no antiviral drugs or safe and effective FDA-approved vaccines against several medically important arboviruses, vector-control strategies remain the only effective route to prevent a disease outbreak. The major goal of the laboratory is to understand the vector-virus interactions and then to develop new strategies for transmission interventions.

Currently, we are engaged in several areas of arbovirus research. Although most arboviruses contain RNA as their genetic material, DNA forms of the RNA genome are generated following infections in mosquitoes. A current project concerns the roles of the DNA form in virus replication. Another project is to understand the mechanism of vertical transmission (VT) of flaviviruses. VT is characterized as direct transmission of pathogens from parents to their offspring. VT is believed to play an important role in maintaining the virus in nature during extreme weather conditions, such as dry seasons in tropical areas or cold seasons in temperate regions, or when the density of susceptible vertebrate hosts is low due to vaccination or natural infection. We are also interested in the role of RNA-RNA recombination in virus evolution. RNA viruses mutate at a high frequency. An RNA-RNA recombination event can bring mutations from two genomes into the same RNA molecule. Recombination may produce a new virus if two similar viruses simultaneously infect a host cell. Similarly, the outcome of a recombination event would be unpredictable if a recombination event occurs between a vaccine virus and the virus circulating in nature. We are involved in developing an in vitro system to study RNA-RNA recombination. Such a system can also be used in the anti-viral drug development process.

Previously, we studied the mechanism of homologous recombination using the powerful genetics of the yeast Saccharomyces cerevisiae. In addition, we investigated genome rearrangements associated with repeated DNA sequences, such as inverted DNA repeats and trinucleotide repeats (TNRs). The expansion of TNRs is the causative mutation of several human genetic diseases, including Huntington disease, myotonic dystrophy, and fragile X syndrome. The mechanism of TNR expansion is not clearly understood. Our studies generated interesting results concerning the mechanism of TNR expansion. 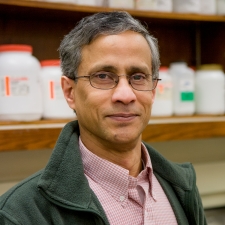